Look out, I've been fiddling around
in the kitchen again 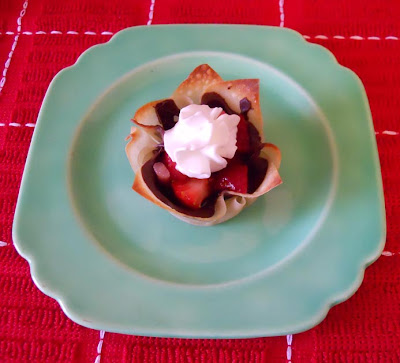 It's what happens when I have an incurable sweet tooth and nothing  tasty in the house.  I was watching  So You Think You Can Dance, so of course couldn't get up and go to the store. As if I would anyway...

I remembered seeing in a magazine (I'll think of which one) lots of ways to use egg roll wrappers. What do you know, I had some in the fridge. I had visions of making egg rolls when I bought them, but alas, it never came to pass. (Big surprise)

This was easy peasy, so I'll show you how I did it. First, take one big square egg roll sheet and cut it across and down in four equal pieces, making four little squares. Fit the squares into the cups of a muffin tin. Since I was experimenting, I doubled some and left some single, and found it really doesn't matter one way or the other. I sprayed them with some Pam, but again, I don't think you have to now that I see them finished. I think they would come out fine without it.   Put them in the oven at 350° just until crispy.

Meanwhile, microwave about a cup of chocolate chips (I used semi-sweet) for a minute. If not completely melted, put them in for 10-15 more seconds at a time until they're all melty. Spread the chocolate in the bottom of the cups, and this is what you have. 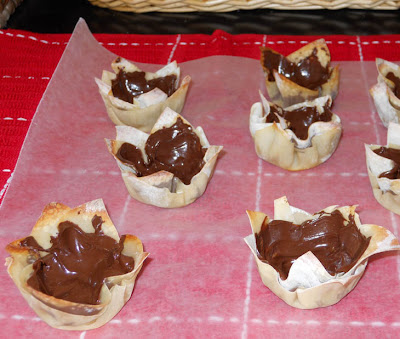 Not too gorgeous yet, but a lot of the chocolate will get covered up.  Or maybe you're better at putting in the chocolate! (The chocolate was taking too long to harden, so I put them in the fridge for a few minutes.)

Now is when you can get creative because you could fill these with almost anything!  I keep picturing ice cream (have to eat fast) but you could use pudding, mousse, hmmm, anything sweet. I happened to have strawberries on hand. I cut them up smallish, mixed in a little apricot-peach preserves (if I had had strawberry preserves I probably would have used that ~ but you'd be surprised how yummy the apricot-peach was). 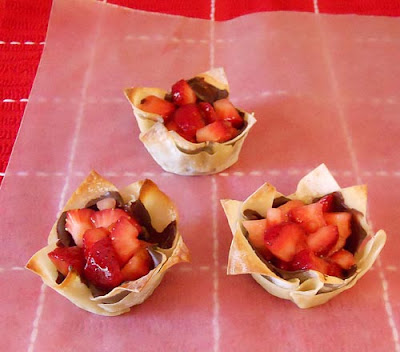 Finish them off with a squirt of whipped cream and
enjoy! 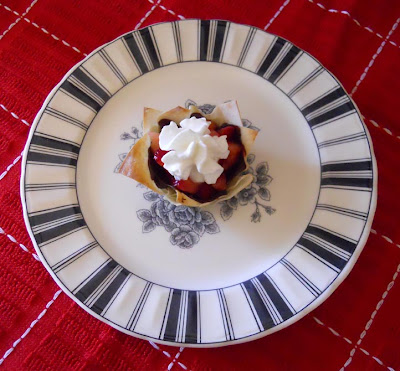