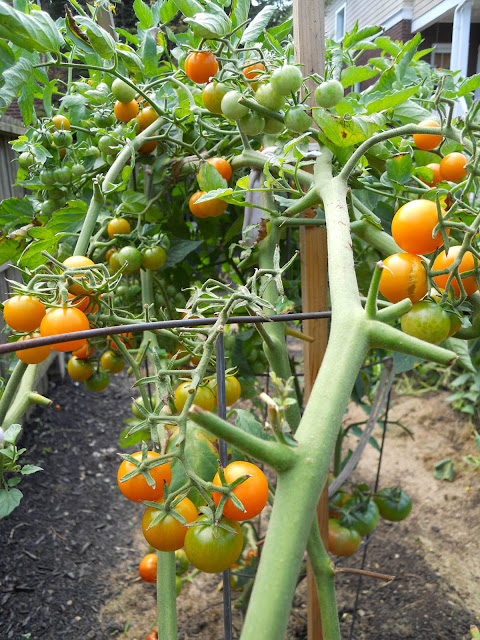 I've been in the garden and the kitchen a lot today.
These little orange cherry tomatoes have been amazing.
They've used up their own space and now are climbing on the neighboring
plants on either side. I pick a huge bowl-full everyday.
They are meant to be orange, not red . . . if you leave them
one second too long on the vine, they split from being over-ripe, I guess.
So you see why I am out there picking these everyday!

I've moved on from popping them in my mouth plain and putting them in salads
to doing a pseudo-sun dried thing in the oven. I guess you would call them roasted. 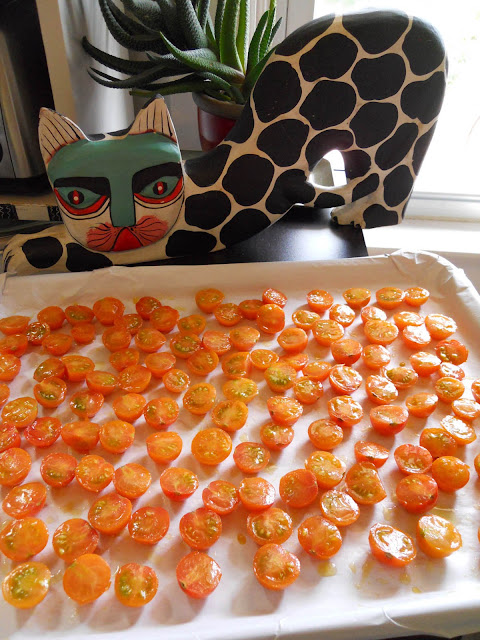 This ugly cat will not help me eat them. I found him tucked away on a high shelf
in the pantry that we are turning into a bathroom. He's still pouting about being
back there for years. He actually has a kind of ugly-cute thing going on.

Out of the oven. 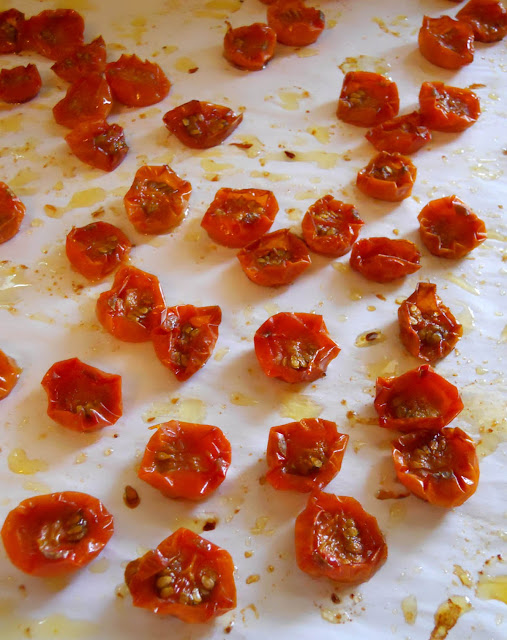 Into some jars. With a little more olive oil. 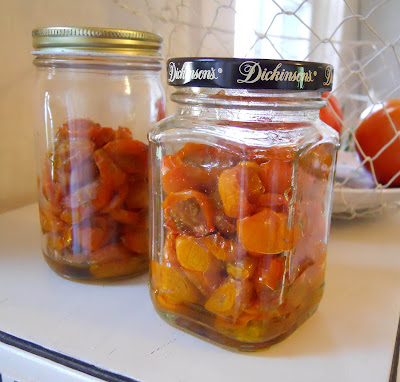 I'm meant to be painting today. Actually, I am painting.
I've been going back and forth.
Not the most efficient way to go about it though.

I made a peach crisp too. 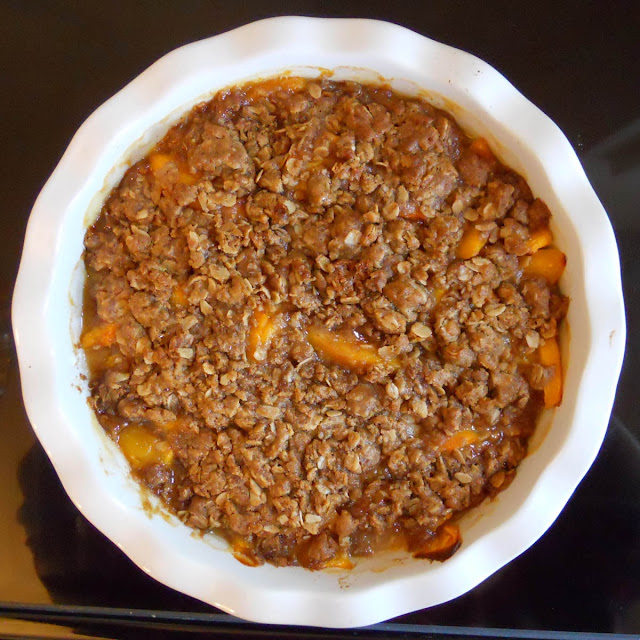 Now it's time to start thinking about what to have for dinner, and
I am sick and tired of the kitchen!

The garden has been what I would call a success this year.
Maybe it loved all the rain.
We have tons (I really mean TONS) of peppers,
many many tomatoes, actually had some delicious eggplant,
and I can't keep up with the basil.
I have given cucumbers to all the neighbors (multiple times),
gave some to the neighbor's houseguests,
hubby has taken bags of them to work (multiple times),
and I gave a bag to the cat sitter (tried multiple times, but she still had plenty).
They are piled on the kitchen counter too.

The only failure was one of gigantic proportions.
Jesse planted some Dill's Atlantic Giant pumpkin seeds.
He had a hankering to grow a 1,000-pound pumpkin
and read online that these seeds are the way to go if
you are wanting a pumpkin like that.
The vines started out spectacularly, and we
had people coming from far and wide to ogle them.
I mean, the leaves were huge like elephants' ears!

But. Sometime around the end of July everything started
REALLY going downhill.
The whole thing was just dying by leaps and bounds.
Mildew-y leaves, yellow leaves, rotting stems...
Shriveled pumpkins. It was not pretty.

We don't have a clue what exactly went wrong.
Jesse, being 23, having a job, and actually having a "life",
of course didn't have the time to take proper care of his pumpkin vines,
so I feel they died on my watch! I took care of them the same
way I took care of everything else. I feel bad.
I may need therapy for this. Just kidding.
We'll try again next year, or at least I will.
Jesse will have forgotten all about it.

Does anyone have a good recipe using ALOT of basil,
besides pesto? 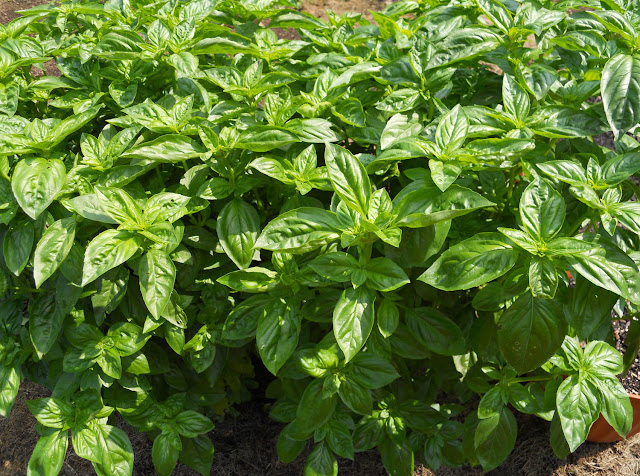 I love pesto, but I've made it 3 times now.
Doesn't get eaten much by anyone here but me.
I have no problem finishing it up, but I am thinking the calories
may not be in my best interest. lol.
Mmmm . . . Parmesan cheese, olive oil, walnuts . . .
in fact, I could just skip the basil and eat those alone!

Are you growing anything this summer?
(Assuming you are in the northern hemisphere. ahem.)
How has your garden been treating you?

Figured out what to have for dinner . . .
Stuffed peppers, of course! 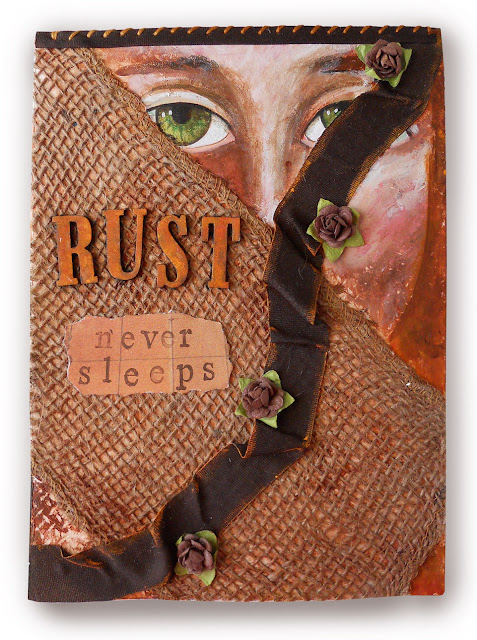 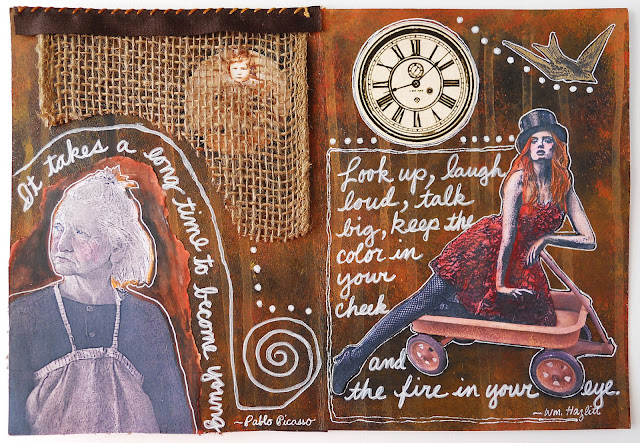 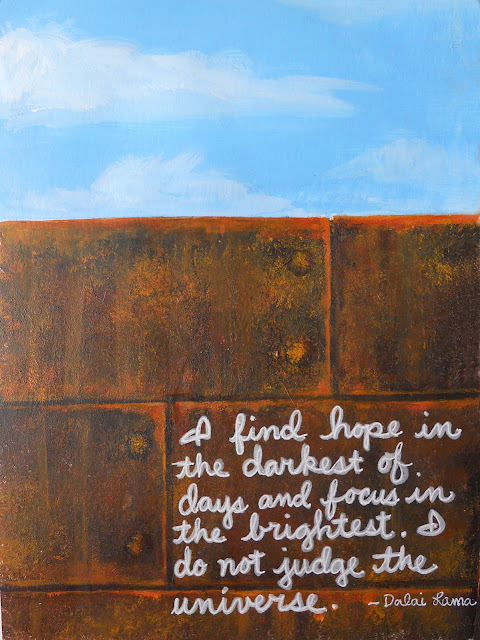 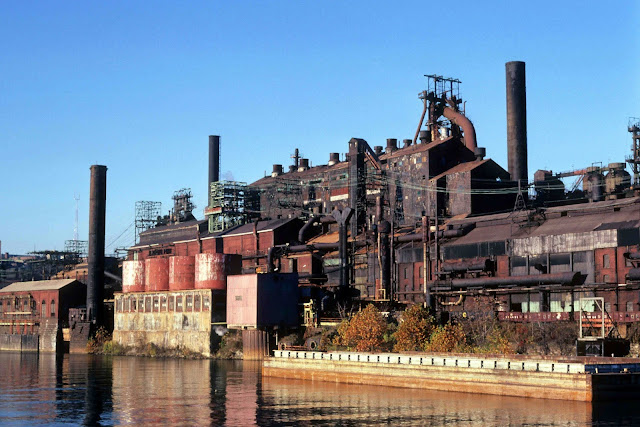 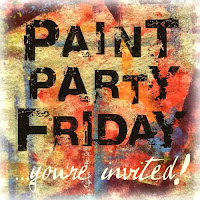