~ What I always think at the end of the week
as I finish my IA challenge :) 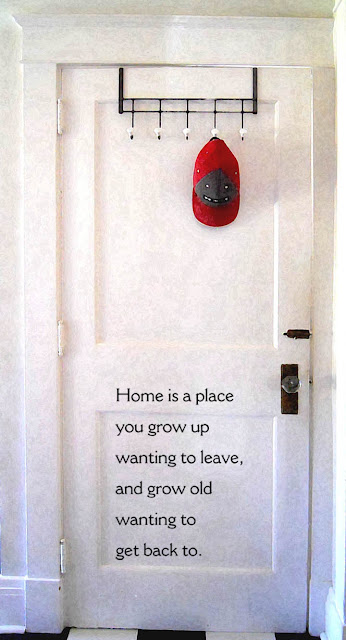 I think the quote above is so true.
My son left for college this week, and is now
officially on his own.  Only about 50 miles
away, so not so far.
Far enough for him to feel independent,
and far enough for me to throw out
all the shoes he left behind! Yucky shoes!
To pretend his room is now a guest room?
Nah, I think (hope) he'll still be using it
from time to time.
Speaking of words,
I'll leave you with some quotes I like:
Of course there's a lot of knowledge in universities:
the freshmen bring a little in;
the seniors don't take much away,
so knowledge sort of accumulates.
~Abbott Lawrence Lowell
Twenty years from now you will be more
disappointed by the things you didn't do
than by the ones you did.
So throw off the bowlines,
sail away from the safe harbor.
Catch the trade winds in your sails.
Explore. Dream. Discover.
~ Mark Twain
It is always sad when someone leaves home,
unless they are simply going around the corner
and will return in a few minutes
with ice-cream sandwiches.
~ Lemony Snicket
A professor is one who
talks in someone else's sleep.
~W.H. Auden
And finally:
If at first you don't succeed,
do it like your mother told you.
~Author Unknown


(Quote on the door above by
John Ed Pearce) 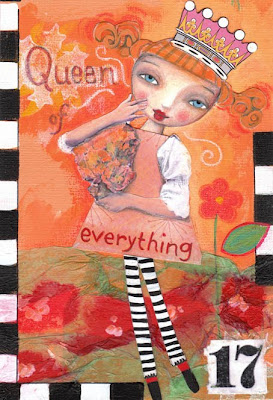 I love The Three Muses blog and the challenges,
and each week I try to make time to enter.
Usually to no avail.
I adore everything Zetti, so this week
there was no turning back!
I was compelled to create something!
Here is my entry.
I was tempted to use this piece for the
Inspiration Avenue challenge
which is "The Power of Words"
but I'm going to think of something different
for that challenge. However,
powerful words are eluding me at the moment . . . 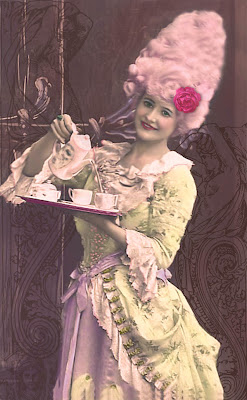 I have to admit I was stumped by my own challenge.
Even though I'm a coffee drinker,
when I found an image of a posh lady
pouring tea I knew I had to enter a digital piece.
I gave her some Marie hair
and fancied her up with color.
I think she'd better sit down
before she has an accident with that tray. . .
To play, visit  Inspiration Avenue before Sunday
August 22 at 12 noon (edt).  Just leave a comment
with a link to your Coffee or Tea creation.
Just like to see all of the submissions?
Visit on Sunday afternoon to see all of
the entries posted together.
Plus, you can visit each blog to read about
each artist's creative process.
Now, it's time to go get a little caffeine. . . 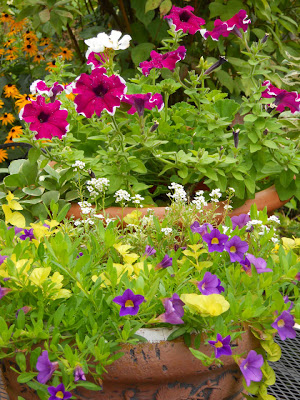 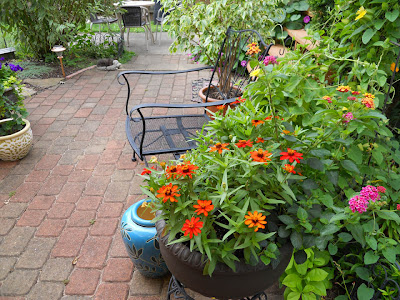 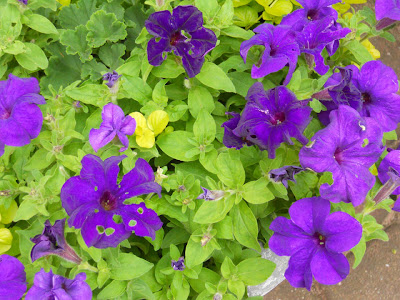 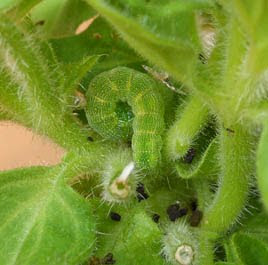 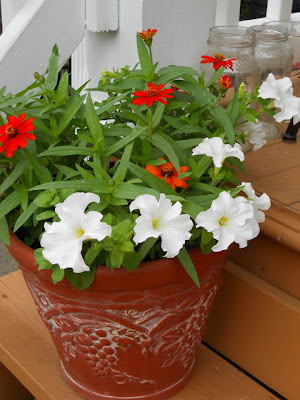 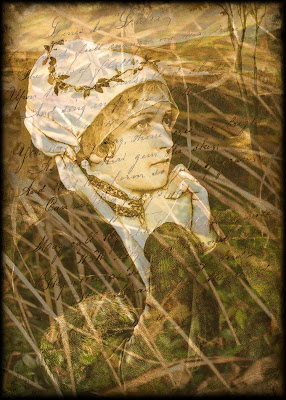 This is an image that I posted as a "freebie"
on my blog, On the House.
I think the young girl's face looks very hopeful.
Who knows what she is hoping or praying for,
but one's imagination can go in many directions. . .
I thought it was perfect for the weekly challenge
at Inspiration Avenue, which is, of course,  Hope.
(If you would like to download the high resolution
version of the image, you can do so  here.)
Visit Inspiration Avenue to enter the weekly challenge,
or just to view all of the entries. You have until Sunday
August 15 to submit your entry. And stop back Sunday afternoon
to see all of the submissions posted together! 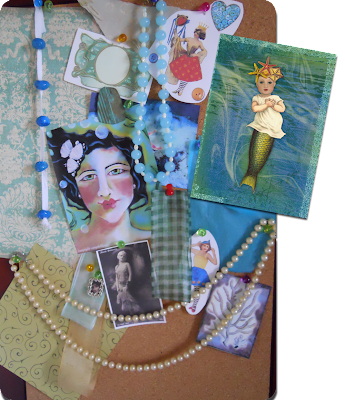 I'm excited to be taking Suzi Blu's new mermaid class,
La Sirena
It starts August 15, but in true Suzi fashion, she has us
students collecting bits and pieces of inspiration well
ahead of time. These are some things I found
that speak mermaid to me!
I'm sure I'll find more in the days ahead.
The GORGEOUS mermaid face above
is by CampbellJane, an artist and Etsy seller.
Visit her shop and you will be amazed at her work!
The little mermie baby I put together as a digital collage.
The other things are odds and ends of inspiration. 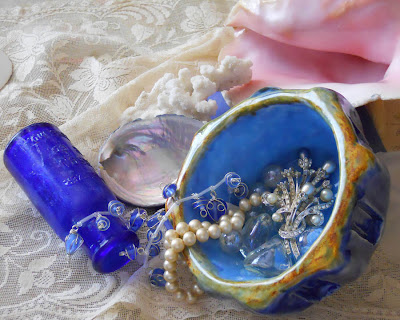 I'm sure mermaids love jewels and sparkly things.
How else to entice those sailors, sinking their ships?
Well their singing and irresistible beauty also help, I imagine. 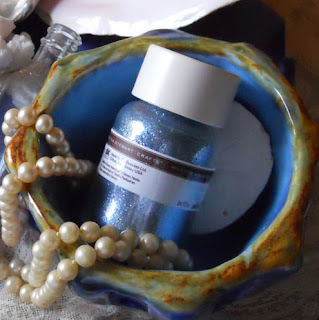 On a slightly different note:

1. The faculty of making fortunate discoveries by accident.
2. The fact or occurrence of such discoveries.
3. An instance of making such a discovery.

While looking for an old post today, I just discovered that
my very first blog post was one year ago today, August 11.
I was pretty sure I started my blog in August but
didn't have a clue on which day!
So, in true clueless Magpie fashion, I have not planned a
celebration or a giveaway or anything like that.
But, who knows, before the month is over there
may still be time for something fun!

In Another World . . .
Do you believe in FAeRiEs?
The theme this week at Inspiration Avenue is "Other Worlds"
and technically, faeries are believed to reside among
us in this world. But they are so elusive and difficult to see
that I am giving them Other World status!
You may think of the tooth fairy or fairy godmothers
when someone mentions faeries.
But throughout the ages, faeries have been known more
for mischief and downright dirty deeds, and
there are many invocations, spells, and superstitions
meant to ward off their evil-doings. 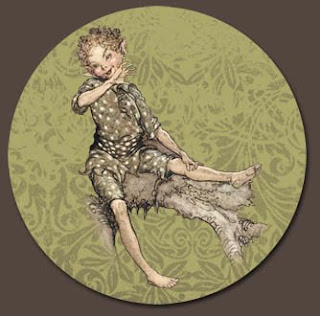 Running water, church bells, four leaf clovers,
St. John's Wort, cold iron, and bread
have all been used to protect from faeries.
Avoid digging in faery hills at all costs,
and don't travel on the paths that faeries use!

Home-owners have knocked corners from houses because the corner blocked the fairy path, and cottages have been built with the front and back doors in line, so that the owners could, in need, leave them both open and let the fairies troop through all night. Locations such as fairy forts were left undisturbed; even cutting brush on fairy forts was reputed to be the death of those who performed the act. Fairy trees, such as thorn trees, were dangerous to chop down; one such tree was left alone in Scotland, though it prevented a road being widened for seventy years. [source]

Make no mistake, just like all forces of nature, faeries can be both good and bad.

. . . like nature itself, fairies may be dark or light, gentle or violent, benevolent or cruel, beautiful or grotesque. They may not only be any size, but may also take any shape. [source]

Gnomes are known for their kindness to animals. 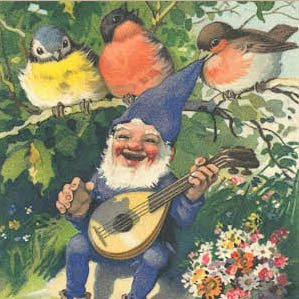 Gnomes are the guardians of animal kind and show little preference for their animal friends, not withstanding their aversion to cats both wild and domesticated. They are known for freeing wildlife from man's traps and for operating on farm animals whose owners have neglected them or who are simply too poor to afford a veterinarian. Their enemies are mainly Trolls, and other beings who would try to destroy them or their homes. Otherwise, they are mostly peaceful beings.

Most Gnomes are 7 times stronger than a man, can run at speeds of 35 miles per hour, and have better sight than a hawk. These abilities help the Gnome to do many things, such as find wounded, dying animals for which they feel they are responsible. Because of their love for animals, all the animals of the forest are the Gnome's friends and are willing to help him at any time. Many people say that gnomes have elevated practical jokes to an art form. But most especially they love gems and jewelry and are considered by many to be the best gem cutters and jewelers in existence. [source]

Have you ever seen a  faery?
Visit Inspiration Avenue this week to see the
interpretations of the theme, Other Worlds!
All entries will be in by Sunday evening (edt) and
soon thereafter will all be displayed together.
Enter a creation yourself if you have
something other-worldly to share!
Each entry for the month will be eligible for
a chance at the August Giveaway! What a Sale!
My friend Sharon has an Etsy shop that is quickly selling out!
These are some beautiful pieces I bought from her that I adore.
Her attention to quality and sense of style and color are amazing.
Mana Moon Studios will soon be sold out.
All of her remaining inventory is 75% off!
Sharon has decided to focus on her
graphics business, Plumrose Lane, instead of jewelry.
Head on over to Mana Moon Studios
to snap up some exquisite pieces! You'll still find
an amazing selection if you hurry!