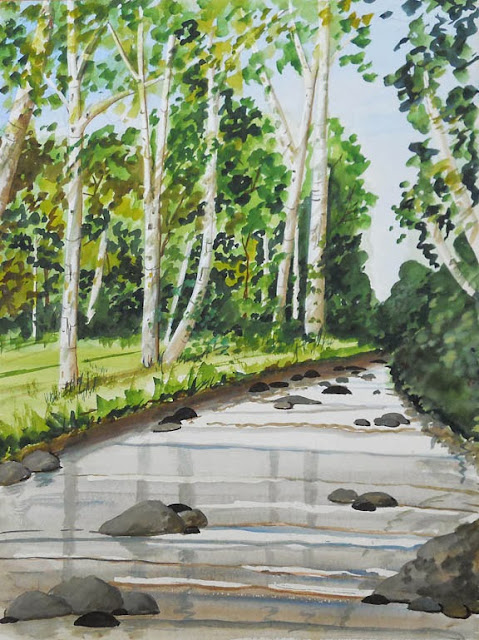 Above is a watercolor I did many years ago.
It is from a photo I took in Virginia, probably
around Petersburg or Williamsburg, or maybe Richmond.
We used to drive in the country a lot in those days,
and found many beautiful woodland places.

I didn't want to let this challenge go by without posting something
(especially since it was my turn to choose the theme, and also because
woodland forests are some of my favorite places).

Suddenly it's Friday already and I am busily working on
my postcards for the IA Altered Postcard Swap
and also finishing up my pages in Angie's beautiful White Journal.
No time to spend on Woodland art, even though I would love to!

Since it's a favorite subject for me,
I do have some things I may not have posted before.
Okay, I probably have posted these at some point,
but there's no time to search around to make sure!

This one is from my 2012 Sketchbook Project journal: 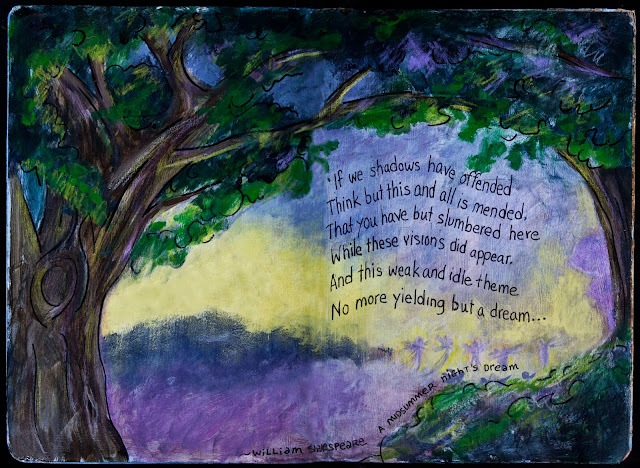 I had to download the one below from the SBP website when I discovered I
never photographed these 2 pages. Of course, the sketchbook is now at the
Brooklyn library (along with the other thousands of entries :)
It's kind of cool to think the sketchbooks will be there probably as long
as the library is there for anyone to check out and look at!
The project is ongoing, a new one every year. I haven't entered again, but I may in the future.
The SBP people have digitized the books...HERE is the link to my pages. 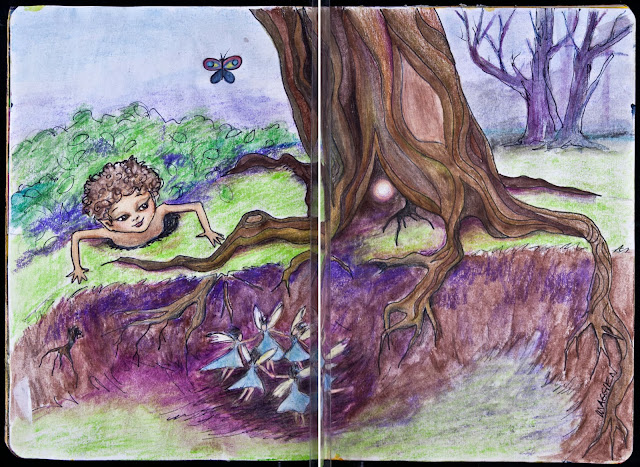 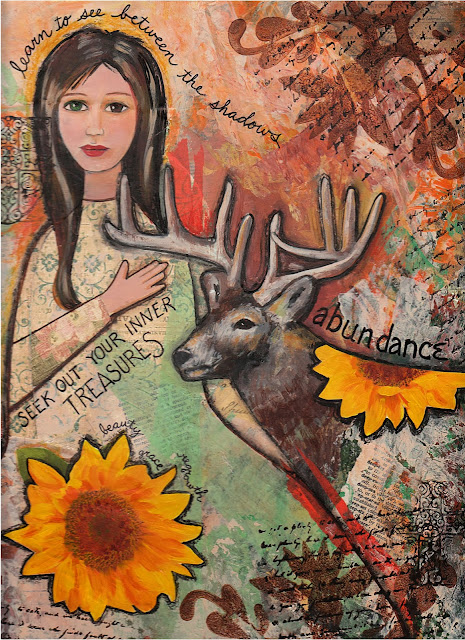 This one I have since started to rework, and it's unfinished now but I hope
to get back to it one day soon...finish it and put it in my Etsy shop.

Here is a bookmark which is in my Etsy shop. 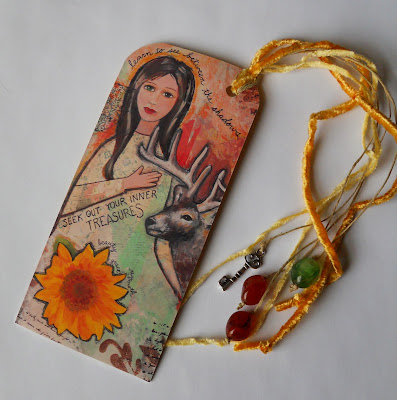 Visit Inspiration Avenue to see
the entries in the Woodland challenge. 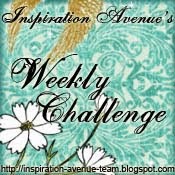 Have a great weekend, everyone!
I hope the autumn weather is treating you well!
(Or Spring, as the case may be :-)


Not Kodak, but nevertheless, a “Moment”

Not even film, of course, but digital. 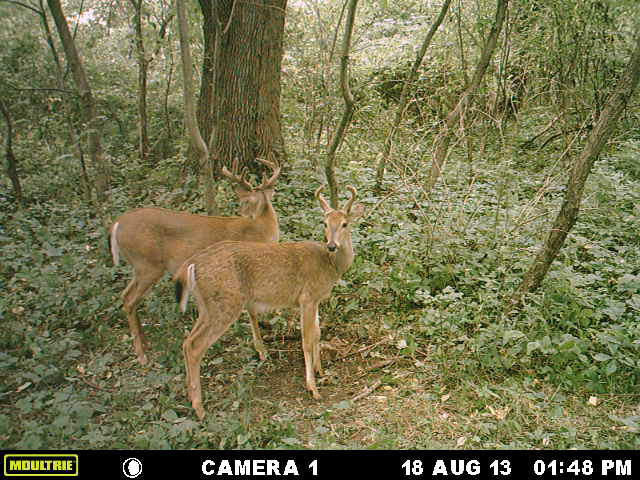 These pics are from Jesse's trail cam.

Deer seem to come out more often at night (safer that way? ...debatable)
And I think it's unusual to see 2 bucks together. They are usually alone. 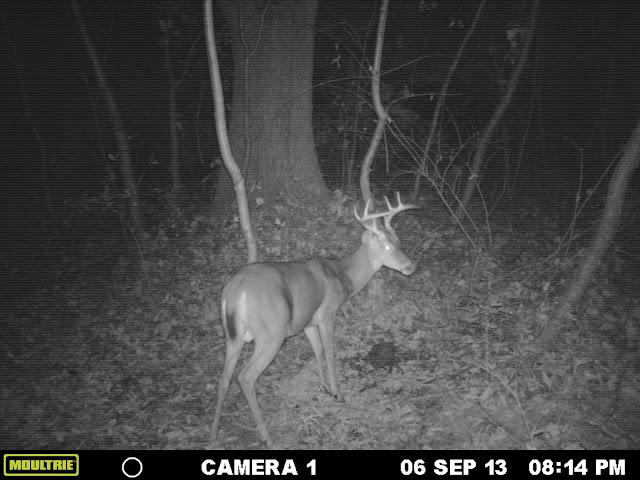 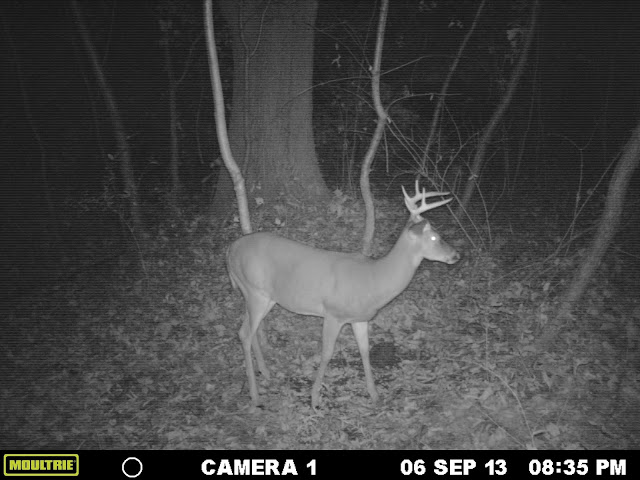 Head over to Inspiration Avenue 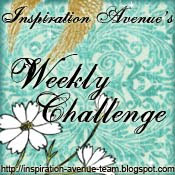 Magenta and Teal for Kat 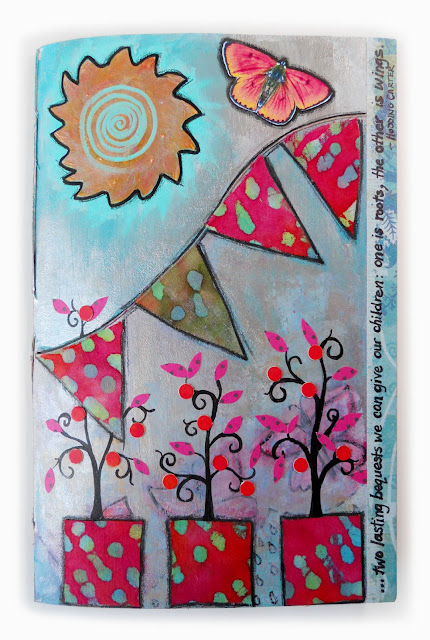 . . . and a bit of silver . . . and gold . . . and butterfly colors . . .
I so enjoyed working in these happy colors that were chosen by Kat.
Although, as usual, I ended up sneaking in a few extra hues here and there.
The fabric I used for the flags and flower pots does gradate from magenta to red.
But, looking back, I think I've basically stuck to magenta and teal.
I loved the quote on the right side of the first page:

“Two lasting bequests we can give our children:
one is roots, the other is wings.”
~ Hodding Carter

So my theme became Roots and Wings.

I've known Kat loves angels, since the time she so generously purchased
one of my angel paintings during a charity auction years ago.
Angels are fun to paint, both realistically and whimsically.
After doing a few in Kat's journal, I'm thinking of
painting some Christmas angels later on. 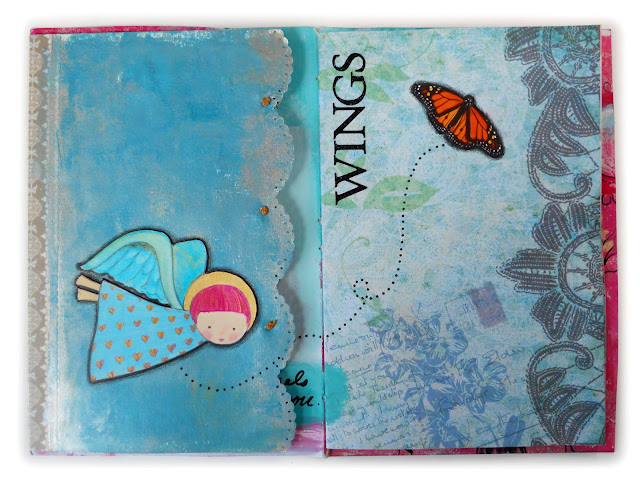 Believe in angels, as they believe in you. 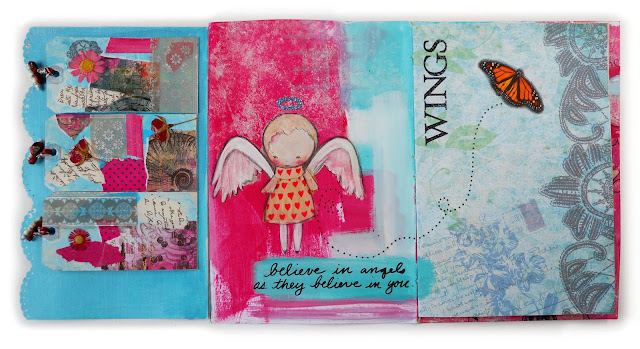 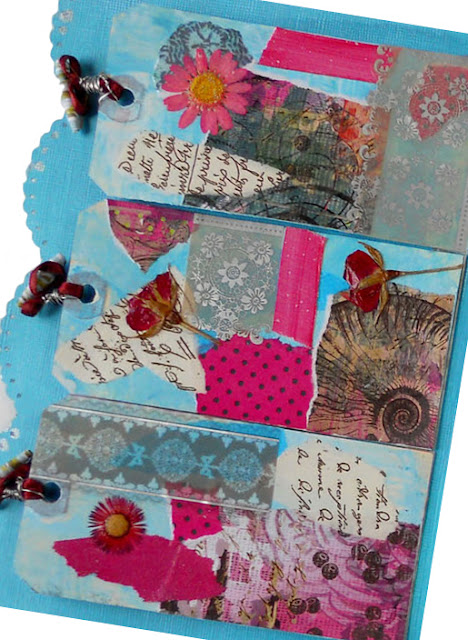 The reverse sides of the tags say
Faith
Hope
Love 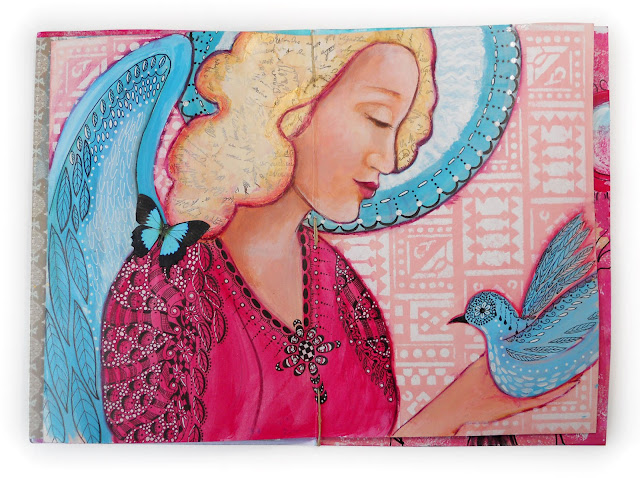 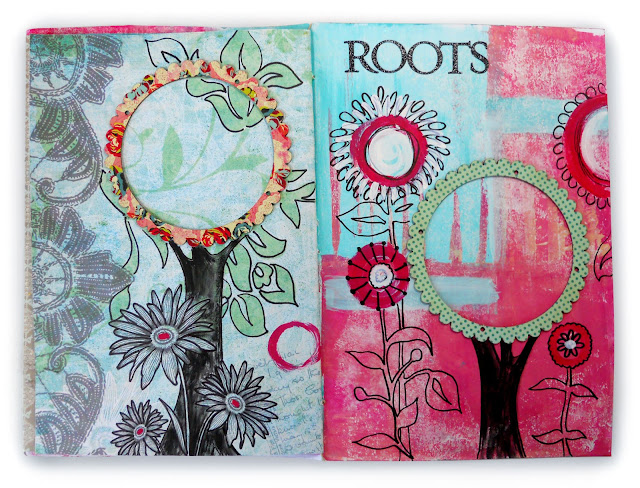 I know Kat loves trees, but I've just discovered she has a secret wish

to own a small propeller plane...magenta-pink with turquoise polka dots of course!
(another fine example of Wings!)

acrobatics in the sky in her whimsical plane,

but I've already sent her journal on to Priti Lisa!

Ah well, I'll keep this in mind for another time!

Two more journals to go in this Magical Journal Journey.
hmmm...one is white, the other is turquoise.
I think both will be fabulously fun!

Don't forget, one more day to join in on the
Altered Postcard Swap
at Inspiration Avenue! 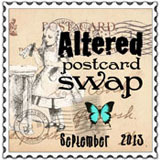 Deadline to join is September 5.
You will have til September 21 to complete your postcards!

Would you like to join an
Altered   Postcard   Swap ? 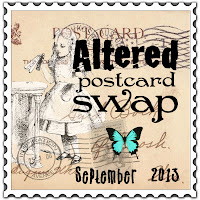 Head over to Inspiration Avenue HERE to
read the details. But hurry . . . deadline to join is
September 5, 2013!

I've never made an altered postcard before...
So if you've never made one, join in anyway...
there are lots of examples to be found to give you ideas.

CLICK HERE
to see what you can find by Googling "altered postcards".

There is a junk/antique/thrift shop near me where I found
these postcards that I'm thinking of altering: 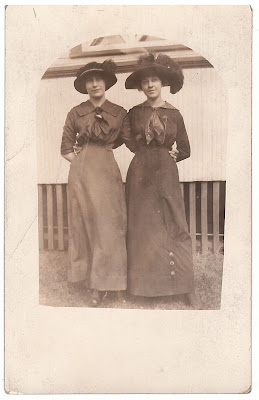 Unfortunately there is no message on the back of this one.
Guess I'll have to make up my own... 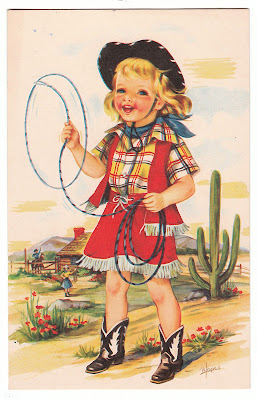 I had a cowgirl outfit very similar to this, so
this one really caught my eye! 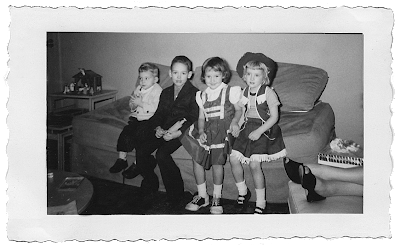 Ha! Found it! That's me on the right.
I guess my mom (er, I mean Santa) forgot to bring the boots. 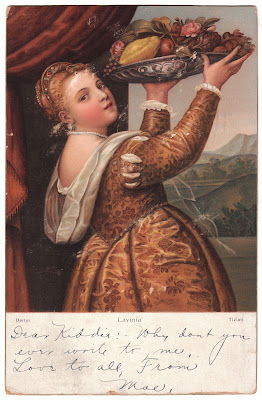 Love this message, a loaded question
that really deserves an answer:

It could also be Mae, but I think it's Moe.
It's addressed to:

and came from Boise, Idaho. 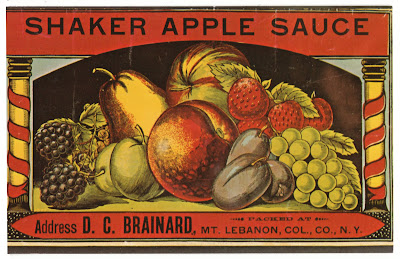 This one is a postcard of a fruit label.

Stop over at Inspiration Avenue to join and to see
examples of some altered postcards.
This one is one of my favorites since I love Frida: 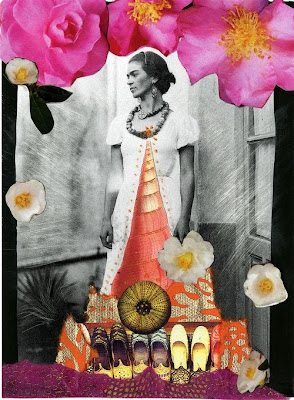 See you in the Swap!