Simplify, Simplify
Even though I loved all the flitting merry
Christmas birds, I thought it was time to
neaten things up a bit so I've changed my
background once again.
Truth be told, I was ready to tear my hair out
trying to read what was on my blog roll
as it scrolled over all the pine boughs and holly.
Impossible!
I don't know how long I'll keep this streamlined look ~
I'll probably be longing for some chaos soon...
Speaking of Chaos... 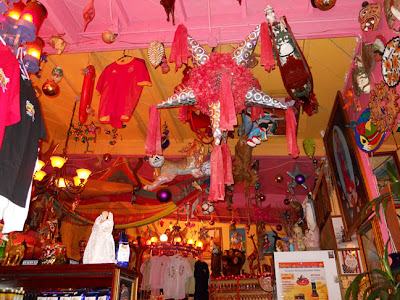 There's a charming Mexican restaurant in Capistrano Beach
called Olamendi's. It's right next door to where we stayed.
Convenient to go there even when it was raining
like the day Noah launched the ark.
The food is good, but there is much good Mexican food
in Southern California. The interior of the restaurant itself
is a feast for the eyes! There is stuff hanging around that they
have most likely been collecting since it opened in 1973.
Just a little hole-in-the-wall place that hasn't changed in years. 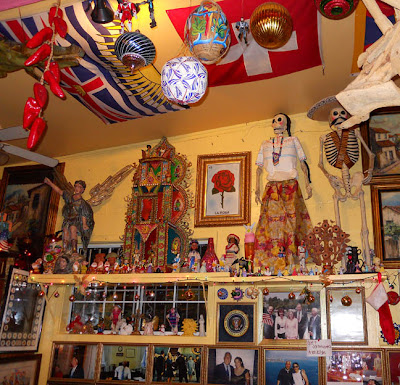 Along with the odd day-of-the-dead skelly are pictures
of celebrities. I didn't have a chance to examine them closely,
but Richard Nixon figures prominently in the line up, since he
had a home down the road in San Clemente.
Presumably he was a patron. I'll just say
I won't hold it against them. 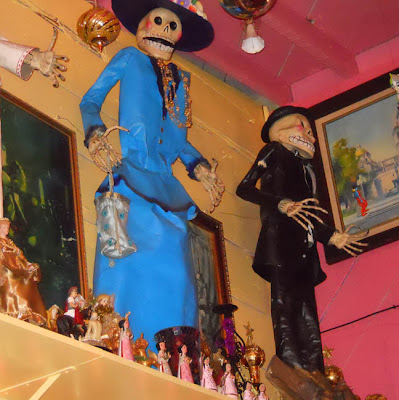 Truly the pictures don't do justice to the color
that is in this restaurant. All four walls plus the ceiling
are covered in the most delicious eye candy!
And More Chaos...
The last time I went to Mexico, I vowed I would not go again.
It's not like it used to be and it just seems a little dangerous.
But, as often happens, not everyone shared my views
and it was either let hubby and son go off without me,
or join in the "fun". We only went as far as
Avenida Revolucion in Tijuana. 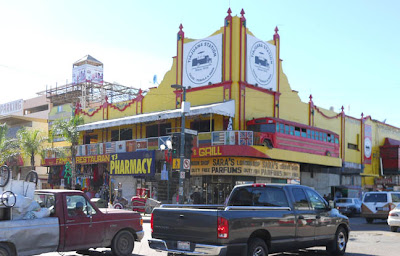 Tourist-y. Dirty. Dusty. Smoky. Where the proprieters
of the shops accost you in the street to come in and buy
their wares. All claiming to have the best prices. 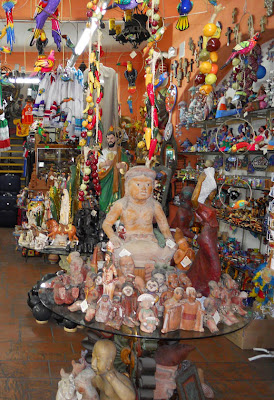 Some of the shops are charming... 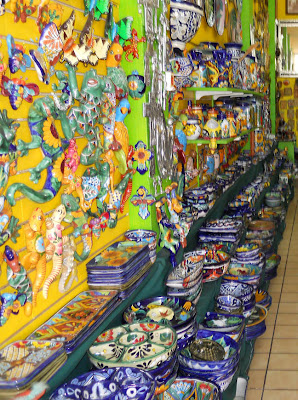 Jesse had to snap a pic of the poor little Mexican
donkeys dressed up like zebras.
There is one on every street corner. 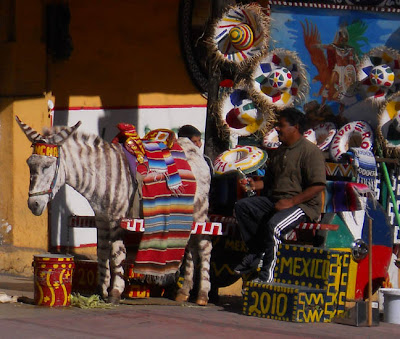 I told him the "zebra's" owner may not like him taking the photo,
since the purpose is to sell a picture to a tourista sitting
astride the little animal. But he snapped this photo from
across the street without being noticed.
And Simply Uncalled For...
In the end, I decided the danger in going to Mexico
might lie in getting back across the border
and not in Mexico itself. I do believe the
US border patrol agents are a little stressed out lately.
As we waited in line to go back into the US,
the agent in our line put up a gate and walked away
without a word. No explanation. No comment.
Of course we were all wondering if he was coming back,
if he just decided to go home, or what.
A guy behind us made a somewhat rude observation.
The guy (just a punk kid, really) started to get off the line
and walk up to the agent's station, complaining.
Phew, in no time there were six big, armed, angry
border patrol agents on top of him.
They had him handcuffed and dragged into a
separate room where we could hear a lot
of altercation going on.
Believe me, when the guard walked up to our line
and asked if anyone else had a problem,
we all lied and said No.
Now, I believe most of the people on that line were US citizens.
Or had the correct paperwork to enter the United States.
Yet we all felt as if we were suspected of being criminals.
The agents working there seemed to be just a teeny bit tense.
Is it because of the drug cartels that have been
causing trouble along the borders?
Is it because of terrorism? Maybe a little of both.
But, geez, talk about stress on the job...