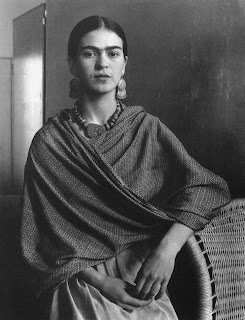 
"Frida Fiesta"
It's been one of the most profound challenges for me.
I learned more about Frida than I ever knew before.
She was involved in a bus accident when she was eighteen,
and suffered many operations, some of which made her worse.
I was moved by the amount of pain she lived with her whole life.
And still made wonderful art until the end. 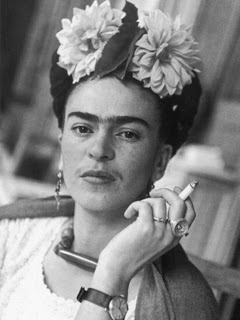 And doesn't it suck that she never knew
the acclaim while she was alive that her art enjoys now.
Today, her paintings bring more money than any other female artist.
During her life, her art was overshadowed by that of her husband,
Diego Rivera. Diego was some 20 years older than Frida,
and their marriage (well, both of them because they were
divorced and remarried) was filled with infidelity on both of their parts. 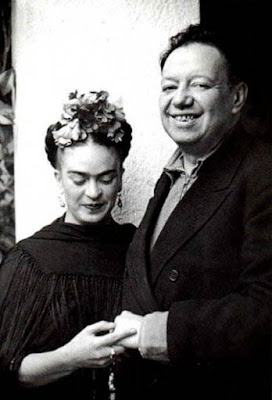 “There have been two great accidents in my life.
One was the trolley, and the other was Diego. Diego was by far the worst.”

I was enthralled by all of the photos that are available of Frida.
I loved this montage because of the still photos but especially
the video portions, which brought her to life for me.
In the videos, I get the sense that Diego loved her very much.
I think he was just a weak man who was incapable of fidelity.
Frida's infidelities I think may have been motivated by revenge.
I think she did love him too.


Some of her paintings have a surreal quality, and reflect the pain she
lived with constantly. At the invitation of French poet and founder of Surrealism
André Breton, she went to France in 1939 and was featured at an
exhibition of her paintings in Paris.  The Louvre bought one of her paintings,
The Frame, which was displayed at the exhibit.  This was the first work by
a 20th century Mexican artist ever purchased by the internationally
renowned museum.  André Breton wrote admiringly:


“The art of Frida Kahlo is like a ribbon around a bomb.”

These paintings are almost too hurtful to look at for me,
and I prefer her self portraits with animals and tropical plants.
I used her photos and those paintings as inspiration
for my challenge entry. 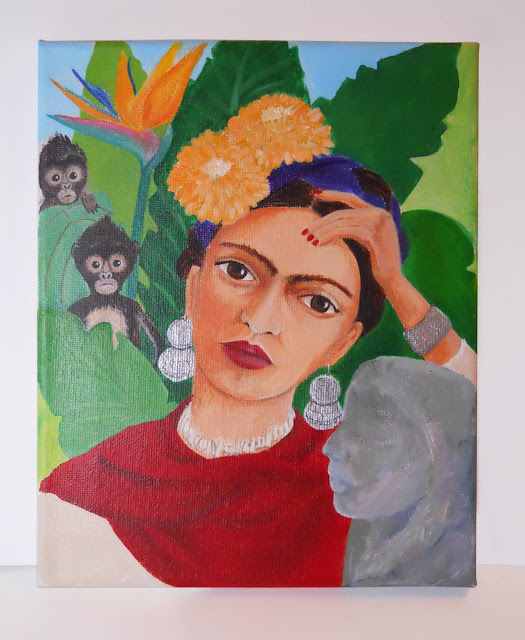 It isn't finished but I'm running out of time!
I want to work on the background, the stone statue,
and the right side of her face needs some tweaking.
If I have time before Sunday, I'll replace this with a new one,
if not, c'est la vie! I'll replace it eventually.


At the age of 47, Frida Kahlo died.
In one of her last journal entries, she wrote:
“I hope the exit is joyful. And I hope never to return.”
I guess she had had enough. It's a tragedy the we didn't get more of her.
I wish her life had been easier.