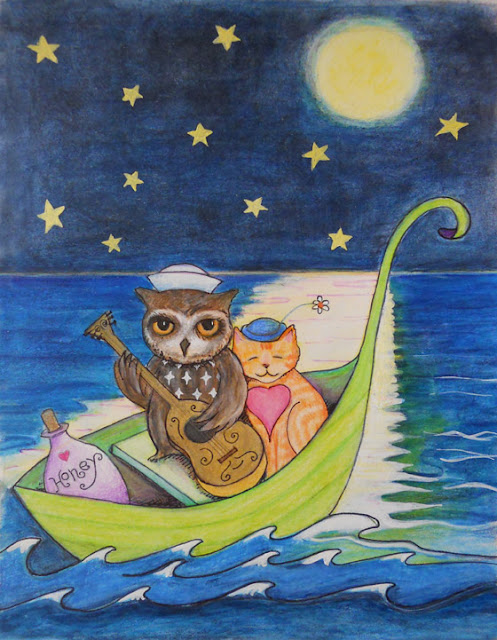 went to sea
In a beautiful pea green boat.
They took some honey, and plenty of money,
Wrapped up in a five pound note. . .
It does go on and on, and I've heard that Edward Lear
had nearly completed a sequel to the poem at the time of his death.
It begins:

The brothers of our family
have feathers and they hoot,
While all the sisters dress in fur
and have long tails to boot.
The theme this week at Inspiration Avenue is
OWLS
Somehow it took me by surprise.
If it had been cats, I would have said Oh Yeah.
But I haven't thought much about owls since my mom's
owl collection in the 70's. And it was just too cutesy for words,
so I must have blocked it out. So looking them up
on Google, I was amazed to see just how many
different species of owl there are.
Too many for me to keep track of.
But now I see why so many people are in love with owls.
They're quite incredible creatures.
Since we're on the topic of owls and cats,
here is something fun to watch:
The gallery of owl creations will be up on Sunday
at Inspiration Avenue.
Paint Party Friday is, of course,
in full swing on Friday!
Visit them both!