Halloween then, now, and in between 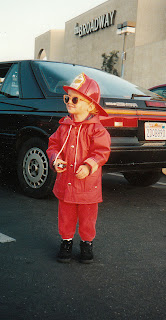 I only clearly remember one Halloween from when I was a kid. But I know we went trick-or-treating every year and our parents would let us go through the neighborhood alone. We were in a large group of kids and this was the 60s, so what's to worry about right? We had plenty of houses to hit right in our own neighborhood. Back to the Halloween in question that I remember: the reason that I remember it was that I stepped in dog doo very early in the festivities, but no way was I missing Halloween. So I just cleaned up the best I could and soldiered on with the group, learning early the meaning of Keep Calm and Carry On. By the way, I was dressed as Peter Pan and my little elf shoes were not doggy-doo-friendly. No photos have turned up of those early Halloweens, my parents were clearly not into Hallmark moments all that much! 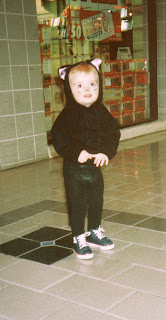 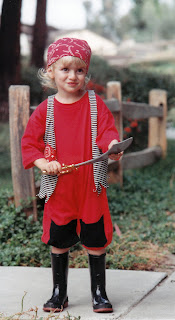 By contrast, I have photos of most of my son's Halloweens until he and his friends just used it as an excuse to roam the neighborhood in the dark sans costumes (multiple photos and double prints — this was the 90s, before the dawn of digital cameras). Until he was 4, his dad and I took him to the local mall on Halloween. In California the mall was the place for tiny little trick-or-treaters. After he graduated from that, one of us walked him through the neighborhood. The most frightening Halloween experience ever: at a house in our neighborhood a guy burst up out of a coffin brandishing a (running) chain saw just as we came up the front walk! You'd think it would give you nightmares, but my kid was fearless then and has been ever since. He's never been one to jump at things that go bump (or roar) in the night! The scarier the better!  Starting with the Ninja costume, it has been a hard and fast rule that Halloween costumes MUST be scary. We have had "Scream", a skeleton, a vampire, and many other gory/frightening characters that I have forgotten.  I know that the Scream mask hung around the house for a few years and was used multiple times when the whole point of Halloween was to go marauding through the neighborhood, not what you looked like doing it. It was the ages between 12 and 14 when they really wanted the candy, but were not that into the dress-up part. 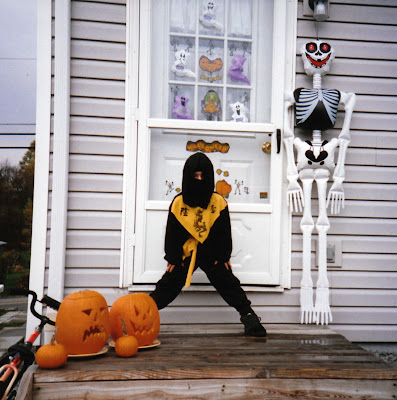 We now live in a friendly old neighborhood where the small kids make the rounds with their parents and bigger kids go out in groups like we used to do. We get close to 100 trick-or-treaters between 6 and 8 p.m. When we close the door and turn off the porch light at 8 o'clock (town rule that saves us — Trick or Treat lasts only 2 hours) we are more exhausted than if we had made the rounds with little ones. Between greeting each little reveler and worrying that the candy might not last til 8, it just tuckers you out!

Anyone have a story to add, scary, funny, anything memorable or best forgotten? Comment if you dare!